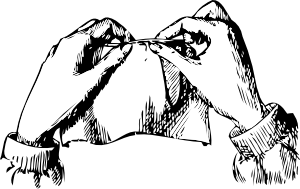 Last night as I sat on the couch doing embroidery I had a little moment that made me smile. Also sitting on the couch was my son (age 10) who was working on a cross stitch and my oldest daughter (age 7) who was was working on a hankie. The moment that made me smile? That all three of us were sitting on the couch, together, quietly (for once), doing some sort of needlework:) The littlest one was there too, not sewing, but just trying to find someplace she could squeeze in on the couch:) Cyndy Pin It
Posted by Wombat's Picnic at 8:09 PM 2 comments 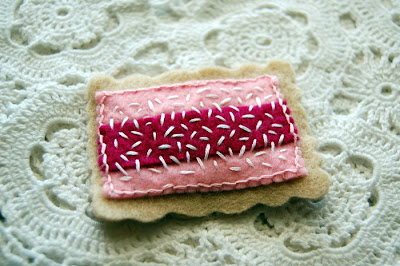 This week I have done a little bit of this and a little bit of that. As a crafter my concentration tends to wander, which is why I usually have several projects in process. It is also why it often takes me a while to actually finish something.

Fortunately there are a few things that made their way into the "finish" pile this week. I did finish a new felt food idea Again, I don't know why, but sweets seem to make the funnest (is that a word?) felt food to make. This is my take on the iced vovo (front and back). 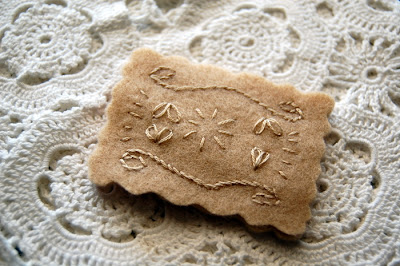 Also in the "finish" pile my items for the Seaweed and Raine Snail Mail Swap. More to show about that in the next day or so as my partner receives their package.

In the "in process" pile, book character costumes for my two oldest, due next week. Yes, I have left this one a little late this year, so I have told the children they need to have simple ideas (my son usually comes up with a bionicle or Pokemon he wants to be). It looks like they have settled on Amelia Bedelia and Butler (from the Artemis Fowl series). Funnily enough, both costumes are black and white. At least this is a project with a clear deadline.

Also in the "in process" pile, a Christmas garland and tags from a damaged copy of the children's book The Australian Twelve Days of Christmas (there are some pages missing). As it's August, this project is clearly ahead of schedule:) I found the book recently at the op shop. It didn't fit in my bookshelf, so I had to start working with it!

I hope you were able to put something into your "finished" pile this week or maybe you've got a few things "in process". To see more creative spaces you can visit here. Cyndy Pin It
Posted by Wombat's Picnic at 10:29 AM 12 comments 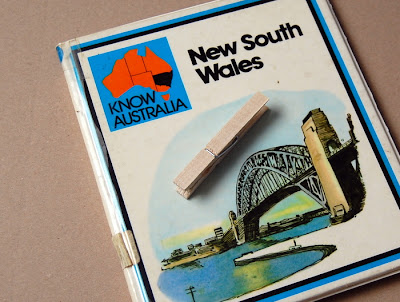 I am participating in my first crafty swap, the Snail Mail Swap hosted by Seaweed and Raine. The idea is to send someone "Sunshine in the Mail" because everyone likes getting real mail (not those yucky bills or junk mail). There are five options of what you can include in your package:

You need to choose at least three. I have been studying my swap partner's (it's a blind swap so while I will be sending to one person, I will be receiving from another person) blogs for ideas of what to send.

I don't want to reveal too much yet, but above is some of what went into the items she is receiving. Will do a full reveal after I send my package later this week. They are supposed to receive their package before September 1. Yes, I am waiting until the last minute to send:) Cyndy Pin It
Posted by Wombat's Picnic at 11:35 AM 4 comments 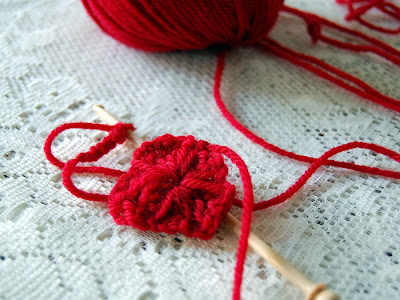 In case you can't tell what my picture is, it is a crochet flower. Yes, I know pretty wonky, but if you squint, turn your head and use your imagination, it does look like a flower - sort of :) I received this crochet hook and wool from a friend earlier this year for my birthday. Learning to crochet has been on my crafty bucket list. Yesterday, I finally got a little tutorial and this flower was my first "try" at crocheting something.

As you can probably tell from my image practice is definitely required! I am sure I will get the hang of it, but I did find crocheting a bit hard. Holding the wool on my left hand and keeping the tension just right takes a bit of coordination. After one flower I was exhausted! Maybe I will have some better examples to share next week:)

Hope you are learning or trying something new in your creative space. To see more spaces you can visit here. Cyndy Pin It
Posted by Wombat's Picnic at 12:15 PM 6 comments

Email ThisBlogThis!Share to TwitterShare to FacebookShare to Pinterest
Labels: crochet, my creative space

The Positive Influence of Masterchef 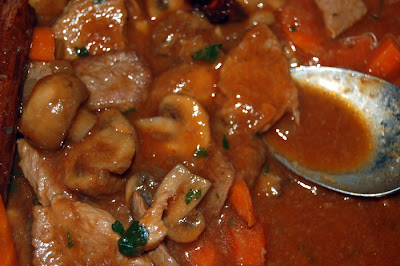 (image of the recipe Emily's veal ragout with soft polenta)
We have just finished watching the 3rd season of Masterchef, the competition for home chefs (Go Kate!). Watching is a family affair for us. We have also watched the celebrity (could go without) and Junior (love) versions of the show. While many people can talk about the negative impacts of TV, this is a show/franchise that has had a positive impact on our family.

Since watching the shows (especially the Junior version) my son (age 10) has become much more interested in cooking and often wants to help or asks me questions about how I make things (unfortunately he has also commented on how some of the Junior Masterchef contestants were more sophisticated cooks than me:)

For Christmas I got him the Junior Masterchef Cookbook and for his birthday last month I got him a Masterchef apron and second cook book. Every couple of weeks he picks out a recipe from the books he wants to make. Some of the recipes we have made multiple times because, well, they are that good!

His interest has been helped along by the fact that his Grade 4 class cooks once a week (our school just got a classroom kitchen, which is fabulous, although his class had been cooking before then, even if it meant on a electric fry pan in the classroom). He now wears his Masterchef apron each Thursday with pride.

Now, I don't think my son will be the world's greatest chef because he watched the show, but his eyes have been opened to new foods (he has even asked to make tomato and eggplant gnocchi even though he's not a big veggie fan and didn't even know what gnocchi was and then ate it because he made it), new activities and even new aspirations (his class is planning to do a Masterchef like competition and he is planning to making a yogurt and cherry panacotta:) So thank you Masterchef for opening his eyes, mind and stomach:) Cyndy

Ps we can't wait to see the next season of Junior Masterchef! Pin It
Posted by Wombat's Picnic at 8:09 AM 1 comments 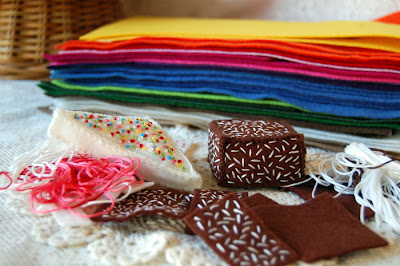 This week I have been finishing up a few felt food items including some cucumber slices, fairy bread (which I started a couple of weeks ago) and lamingtons. I have also been working on some new felt food "designs". Design is a loose word for me, as I have a tendency to just start cutting the felt with nothing more than a notion in my head:) It is fun to see though how it turns out.

This week also marks the first sale from my new madeit shop! I can't tell you how exciting that was - I couldn't sleep I was so excited! Ironically it was two of my felt food pieces. So nice when something you really like also turns out to be something someone else really likes:)

I hope lots of good stuff is happening in your space today - visit here to see more creative spaces. Cyndy Pin It
Posted by Wombat's Picnic at 11:34 AM 6 comments 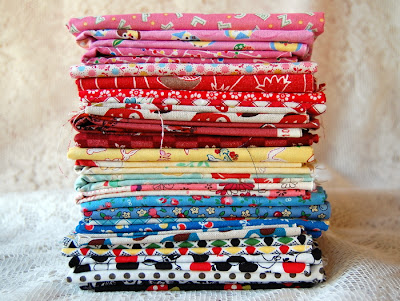 Last weekend I went to the Craft and Quilt Fair in Melbourne. I wasn't looking for anything per se, but who could say no to all those fabrics, notions, craft supplies and inspiration all in one location? While I picked up some (OK, a lot of) fabric to add to my stash, my most exciting find was a doll pattern from AK Traditions which is based in Melbourne. 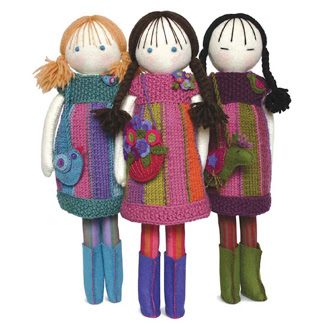 (handmade felt dolls and accessories image from AK Traditions)
A friend has their original doll, Dinara. My youngest (age 3) loves to play with her when she visits, so when I saw the pattern book for their new slightly smaller version above I knew I had found the perfect Christmas present for my little one. It also includes patterns for knitted and sewn clothing, all so cute. And, as if it was meant to be, I have the little Ikea doll bead stashed away for her as well, so it will be the perfect little package. I am looking forward to getting started on the doll this weekend! Cyndy Pin It
Posted by Wombat's Picnic at 12:56 PM 1 comments 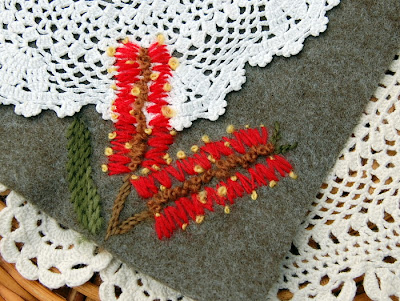 This week things haven't quite gone to plan. Sick children, wonky Internet, and other commitments have meant my new shop isn't as up and going as I would like it to be. That said, I am proud of my self for meeting my goal of "opening" my Madeit shop on August 1. OK, I could only get one item listed on the day, but I did what I said I would do. I managed to get another one listed last night. What do they say? Slow and steady wins the race? Well, that is the philosophy I am buying in to:)

Thank you to all those who left encouraging comments last week - they really were appreciated! It was comforting to know I wasn't alone in my fears/insecurities. And despite my wonky Internet (apparently I have reached my limit this month so it is sloooow as molasses) I am glad to have taken the leap:)

Since my Internet time has been curtailed, I have had time to play around with an idea which mixes two of my favorite things: doilies and wool embroidery. Above is my first play. It's not done yet, but I am liking the idea.

I hope you are getting lots of things done in your creative space this week! See more creative spaces here. Cyndy Pin It
Posted by Wombat's Picnic at 12:36 PM 3 comments