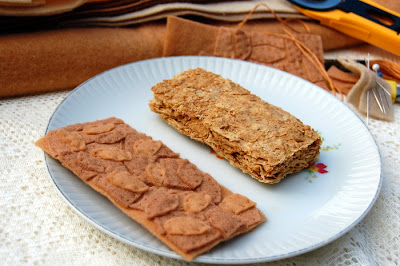 What do you do when you have an idea in your head? Me? I usually go through what's in my craft stash, pull out anything that I think might work with what I see in my head and then its trial and error. If it's something real (like a flower or a food) I will look for pics on the Internet or in the case of food look for the real thing (had to buy a pack of Iced Vo Vos the other week in the name of research:) Sometimes my first try at making is the best try, sometimes it takes more than one try to get it the way I see it in my head.

This week I finished up the Iced Vo Vo set I was working on (just listed in my Made It store if you are interested:) and already had an idea for the next food I wanted to make. I have been on a sweet treat kick (Iced Vo Vo, lamington, pavlova, fairy bread) and have been feeling guilty. My new idea is definitely healthier - Weet-Bix!

Above is take two of my Weet-Bix, conveniently situated next to my research (not as fun as the Iced Vo Vos I will admit). Yes, Weet-Bix is a brown rectangle, but that by it self doesn't capture its essence. Weetbix has texture, and how to capture that in a felt food has been challenging. My first take was one layer of small pieces (like the piece at back of plate in the pic), but it didn't look right. I have now added another layer of pieces, in a more rounded shape. Better, but still mulling it over. And the sides, I do have an idea, but I think it is going to be even harder than the top!

Hope you are getting lots done in your creative space today! For more lovely spaces you can visit here. Cyndy Pin It
Posted by Wombat's Picnic at 10:55 AM

Crazeeee stuff! Who would have ever thought a felt wheatbix could work? Someone creative like you! :-D