I love that my children are willing to try things and push themselves. In March, oldest and middle participated in the Weet-Bix tryathalon held locally. This was oldest's second year participating and middle's first (she wasn't old enough last year). The tryathalon includes three segments: swim, bike and run.

I was a bit worried last year about how oldest would do. He takes swimming lessons, but would he be able to swim the entire way, and what about the run segment, running isn't his strong point. I thought my fears had been realized when I didn't see him finish the bike segment, but it turns out he got a tire puncture half way through and had to walk the rest of the way. Despite this he finished and felt good about his participation, there were never any doubts in his mind.

Ironically this year also had an unexpected challenge. At the last minute they cancelled the swim segment due to algae in the water, and replaced it with a second run segment. Again, I am proud to say my children finished and yes, both are already looking forward to next year:) 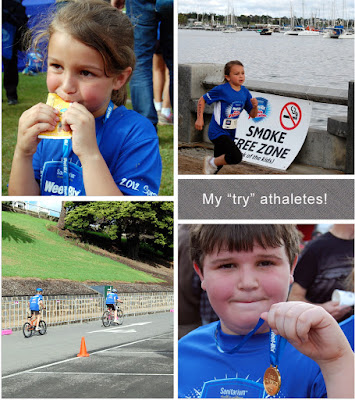